The question everyone wants to know the answer to is what’s next for EUR/USD? Fundamentally, the EUR/USD should be trading lower. Technically, the currency pair is closing in on some important resistance levels. The 61.8% Fibonacci retracement of the record high and record low for EUR/USD sits right above current levels and not far from that is the 100-day SMA. We believe that these resistance levels along with the overstretched rally should lead to a near term move back down to 1.10. 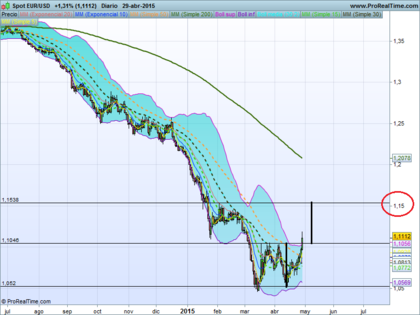 From a technical perspective, the move in the EUR/USD is becoming overstretched with the pair nearing its 100-day SMA resistance. The Dollar Index is also hovering near support at 94. Fundamentally, the prospect of Fed tightening, the crisis in Greece, upcoming election in the U.K. and credit problems in China make the dollar an attractive investment. Also, Japan’s Global Pension Investment Fund, who widened their investment mandate will lend support to the dollar as they expand their purchases of foreign assets.

It is always interesting when the dollar rallies on weak data and declines on positive reports. On Friday the greenback traded higher against most of the major currencies despite an unexpected decline in construction spending, softer than anticipated manufacturing ISM and University of Michigan consumer sentiment reports. On Thursday, the dollar received very little support from jobless claims, which dropped to its lowest level in 15 years. The fact that many markets in continental Europe were closed contributed to the unusual reaction and the general volatility in the forex market. With that in mind, next week will be an important one for not only dollar but all major currencies. We will be focused on non-dollar drivers in the front of the week with the RBA rate decision, U.K. election, New Zealand and Australian employment reports scheduled for release. The uncertainty and risk posed by these reports could make the U.S. dollar more attractive. Towards the end of the week, the focus will turn to non-farm payrolls. Given last month’s surprisingly anemic job growth and the big improvement in jobless claims, everyone expects a significant rebound in payroll growth. The unemployment rate is also expected to drop to 5.4%, which would represent a big improvement that should breathe new life into the U.S. dollar.