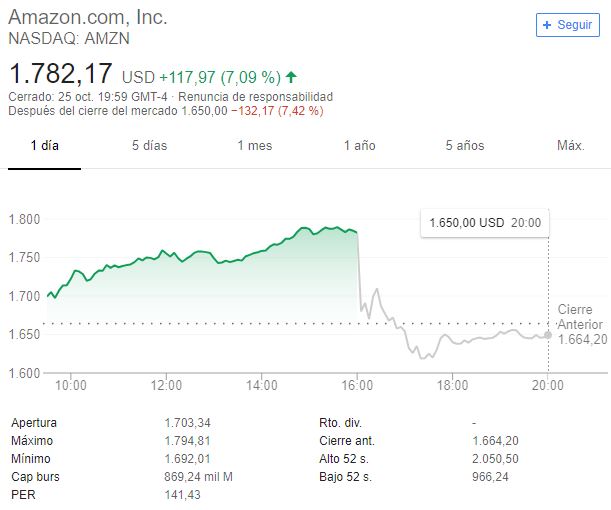 Berkshire Hathaway has been buying shares of Amazon. But Warren Buffett isn’t the one behind the purchases.

“One of the fellows in the office that manage money ... bought some Amazon so it will show up in the 13F” later this month, Buffett told CNBC Thursday, on the eve of the kick off of Berkshire’s annual shareholders meeting in Omaha. Buffett was referring to either Todd Combs or Ted Weschler, who each manage portfolios of more than $13 billion in equities for Berkshire.

Buffett has long been a fan of both Amazon and its CEO Jeff Bezos, praising the company’s dominance and the founder’s business prowess. But while Buffett has sung the company’s praises, he’s never bought Amazon shares. So a headline that Berkshire was buying shares likely would spark interest in the markets.

“Yeah, I’ve been a fan, and I’ve been an idiot for not buying” Amazon shares, Buffett said. “But I want you to know it’s no personality changes taking place.”

This isn’t the first time Buffett has lamented about underestimating Bezos and not investing in Amazon years ago.

In 2017, Buffett told CNBC that “stupidity” was to blame for his not seeing Amazon’s potential. “I was impressed by Jeff Bezos early, I never thought he’d pull off what he did, on the scale of what’s happened. It’s changed your behavior, everybody’s behaviors. The remarkable thing is he’s done it in two industries at same time that really don’t have that much connection.” Buffett was referring to Amazon’s dominance in e-commerce and its success in the cloud with Amazon Web Services.

Amazon’s market value was $935 billion as of Thursday’s close. The stock became the second publicly traded U.S. company to eclipse a $1 trillion market capitalization, just a month after Apple.

Buffett has historically invested in technology sparingly, ending a difficult chapter last year in IBM while ramping up his stake in Apple.

Buffett’s Berkshire Hathaway is working with Bezos’ Amazon and Jamie Dimon at J.P. Morgan on a health venture called Haven. The three CEOs hope the partnership, announced in January 2018, will be able to harness the power of their companies to find health-care solutions for their employees that could be used to help reduce health costs for all Americans.