Es una minera con futuro a largo plazo. Tienen buenos proyectos de litio y grafito, ambos materiales esenciales para las baterias de eléctricos y renovables. También el futuro prometedor del grafito en otras aplicaciones. Proyectos Authier Lithium Project Sayona Mining acquired 100% of the Authier project in July 2016 for CAD$4 million. The Company’s primary strategy is to focus on completing the studies required to commence the development of the project. Authier is a near-term development project and cash-flow generation opportunity. The Company believes it will create significant share value-uplift potential for shareholders as the project is advanced towards development. East Kimberley Graphite Project Strategic Entry into the Graphite Market The Company has announced a strategic entry into the large flake graphite market by securing a large ground position in the East Kimberley region of Western Australia. The Kimberley region is a proven province for high purity, large flake graphite. The market for large and jumbo flake graphite is highly concentrated and potential synthetic graphite substitutes are comparatively very expensive to produce. Both the US and EU Governments have classified graphite as a “critical material” for industrial and national security purposes. The East Kimberley project offers an attractive entry into the graphite market: Proven district for high carbon purity, large flake graphite; The significant scale (up to 20 kilometres strike extent) of the Corkwood graphite target identified from geological and geophysical anomalies; Situated in a well-established mining district, 240 kilometres south of an export port at Wyndham; The region has excellent infrastructure including roads, airports, and labour; First world country with stable tax and royalties, and mining law; and Low cost entry via tenement applications and option-to-purchase agreements. The East Kimberley project is located within the East Kimberley region of Western Australia, 240 kilometres south of Wyndham Port and 220 kilometres south-south-west of the regional centre, Kununurra. web empresa http://www.sayonamining.com.au/ Grafico, alcista de largo plazo 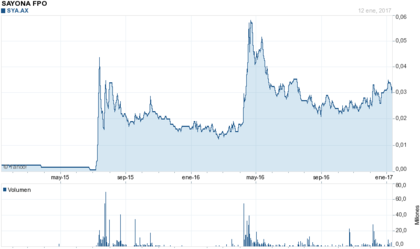 Much of the pegmatite swarm and general tenement area remains untested by any previous lithium exploration.

Corey Nolan, CEO, commented: “The company is very encouraged by the new assay results from both the soil and rock chip programs.

“Exploration will continue with a focus on outlining potential drill targets as soon as possible on a number of the prospective targets identified from the current exploration program.”

Recent reconnaissance and mapping within the Mallina tenement area has focused around the Discovery pegmatite area, with 93 rock and 66 soil geochemical samples collected.

The Discovery pegmatite has been mapped over 500 metres of strike extent with rock chip assays grading up to 2.13% lithium oxide.

West of the Discovery pegmatite, two other areas of lithium mineralised pegmatites have been identified, with rock samples returning up to 2.65% lithium oxide.

Significantly, a single pegmatite outcrop, located 900 metres to the south of the Discovery pegmatite was identified and sampled, returning an assay of 3.47% lithium oxide.

Further reconnaissance, mapping and rock sampling is planned in follow up to the strong mineralisation identified to date.

Work will focus in the area of newly discovered spodumene pegmatites as well as traversing the unexplored remainder of the tenement area.

Follow-up work will commence as soon as possible, once access after the recent flooding is possible.

Earlier this week, Sayona received the results from its pre-feasibility study (PFS) including a maiden JORC Ore Reserve at its flagship Authier lithium project located in Quebec, Canada.

Key outcomes of the study include a pre-tax net present value (NPV) of C$140 million over an initial 13-year mine life.

Other key findings of the PFS include:

The company is now looking at a number of optimisation options to significantly enhance the value of the project, including drilling (currently underway) to expand the Mineral Resource and Ore Reserves, further metallurgical and geotechnical test-work, and other downstream value-adding opportunities.

The deposit is open along strike and at depth.

Last major work programs before completion of the DFS in early 2018.

The company is planning a diamond drilling program of up to 3,000 metres commencing in early November.

Importantly, the drilling and pilot metallurgy programs are expected to be the last major work programs before completion of the DFS in early 2018.

Drilling a large sample for a pilot metallurgy program

Sayona’s primary objective of the drilling is to collect up to 5 tonnes of drill core for a pilot metallurgical testing program to be used as an input into the process plant design in the DFS.

The company will also infill drill within the main resource zone where the mineralisation is not well defined and is currently treated as waste, with the objective of reducing the waste to ore ratio.

Furthermore, Sayona will aim for a potential expansion of the northern pegmatite zone which intersected 7 metres at 1.36% lithium from 15 metres in the last drilling program.

The company is also planning to complete geotechnical drilling which will enable finalisation of the pit wall slopes for the DFS.

Sayona is preparing to start a field exploration program for conglomerate hosted gold in the Pilbara region of Western Australia.

The focus will be at the Deep Well area, where initial reconnaissance has identified favourable stratigraphy, including Fortescue aged rocks.

The conglomerate at Deep Well ranges from quartz pebble conglomerate to those being dominated by felsic volcanic and chert clasts.