By Sophie Sassard and Lionel Laurent

LONDON/PARIS, Sept 8 (Reuters) - French lender Societe Generale has started to cut staff as it adjusts its business to the worsening outlook for investment banking and the dire impact of Europe's debt crisis, employees and union sources say.

The cuts -- mainly in SocGen's corporate and investment bank (CIB) in the Paris region, where half of its staff is located -- have so far been more of a trickle than a wave, but unions say they are on alert for more to come.

"The lay-offs have already begun in CIB," said one employee. "One guy came back from vacation to find a cheque waiting for him...He was told that if he wanted to take it to an employment tribunal it would be long and arduous."

If this anecdotal evidence is accurate, the bank may be avoiding the need for a costly and tightly-regulated redundancy exercise, Paris-based lawyer Mabrouk Sassi said.

"In France there are clear rules when it comes to firing people," he said. "Rather than go into a complex layoff programme that may not be permissible in the current environment, it is possible that there might be a concerted effort by management to reduce staff levels."

A spokeswoman for SocGen said: "At the moment we are stabilising our staffing levels because of the worsening market environment." She added that the bank had not put into place any overall plan to reduce staff.

Major banks around the world have announced tens of thousands of job cuts in recent months following big drops in income from fixed income, currency and commodities (FICC) trading.

SocGen unions are also specifically investigating several cases of employees working in the mergers and acquisitions (M&A) business -- which normally pays lavish bonuses in return for little job security -- who say they have been forced out.

Evidence that highly-paid bankers are seeking organised support highlights how the sector is increasingly worried as financial institutions across Europe reduce staff, hurt by dismal financial markets and tougher regulation.

This has led to frequent rumours it may be forced into a merger with arch-rival BNP Paribas or Italy's Unicredit , which would lead to further cost savings.

Internal documents obtained by Reuters show there were 89 staff departures in June, including 35 resignations and seven lay-offs, compared with 49 departures in the same month a year ago.

The numbers are small in comparison to SocGen's 12,000-strong CIB operation, but could still rise. The bank declined to confirm the figures or give more up-to-date numbers.

Union sources say there has been a "brusque" increase in departures at SocGen recently, with one saying there were "at least" 40 layoffs from the CIB in July and August compared with an average annual rate of 200.

"If (the bank) says nothing is going on while they continue to lay tens of people off at a time, we will take it to a tribunal," this source said.

Former employees in the bank's mergers and acquisitions unit -- led by ex-JP Morgan banker Thierry d'Argent -- said their recent decision to resign came after months of pressure from management, regardless of performance.

"In 2010, I contributed 10 percent of the division's revenue and I received the same bonus as new starters. The management clearly did everything they could to discourage me and force me to leave", said one of them. (Additional reporting by Matthieu Protard in Paris, Editing by Douwe Miedema and David Cowell) 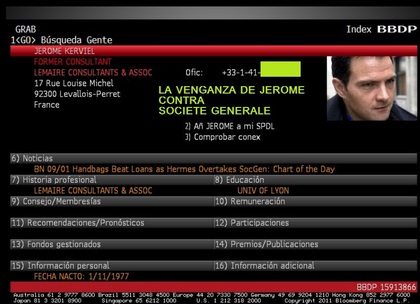