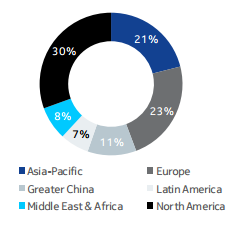 Summary
In hindsight, the hit piece against Nokia (NOK) early last month derailed the steady rally. In the long-run though, the market is a voting machine. So, when the 5G leader posted stronger quarterly results and raised its outlook for the year, shares rose 20% since I last analyzed it. Nokia has another 10% to go before the stock breaks above its 52-week high. Chances are very high that it will get there and continue to reward long-time investors.

There are four reasons Nokia will continue to trend higher.

Nokia's new leadership is a positive catalyst for lifting shares in the weeks to come. Past CEO, Rajeev Suri, did the best he could in steering Nokia through the Alcatel-Lucent acquisition. He led Nokia for the past six years and before that Nokia Siemens Network for five years.

Incoming CEO, Pekka Lundmark, has two decades of experience as a venture capitalist managing partner. He worked as CEO at an energy company and in the heavy equipment provider market. The broad experience will give Nokia the leadership it needs to grow the 5G and its application in Industry 4.0 (automation). Though the 5G rollout is in the early phases, peak sales will, eventually, send Nokia's revenue growth lower. That could be years away but Lundmark should have a plan in place to sustain the company's long-term prospects.

The CEO said that "The challenge now is against complacency and accepting the status quo." If he sees Nokia is complacent, then the shake-up to spur growth will send the stock to the $10 level or higher sooner than I expect.

Nokia posted a significant improvement in cash from operations. Its net cash rose to EUR 1.6 billion (USD 1.89 billion) while total cash topped EUR 7.5 billion (USD 8.85 billion). The quarterly positive free cash flow of $313 million suggests that the company will reinstate its dividend sooner than expected. Since the stock recovered from the dividend cut, Nokia should delay a dividend reinstatement. Ericsson's (ERIC) dividend is only 7 cents, with a yield of only 0.59%.

To widen its lead against Huawei and have a bigger market share than Ericsson, Nokia should buy back shares at current levels. It should boost its cash on hand to increase research and development spend as needed. 5G Powered by ReefShark resonates well with customers. Increasing marketing efforts and improving the product will assure the 35% delivery target sooner than the end of year target.

Nokia posted 83 commercial 5G deals and 32 live network deployments in the second quarter. Its shipment forecast is ~100% by the end of 2022:

Investors may anticipate Nokia raising the strong pace of 5G shipments highlighted above. Such a strong win rate suggests that Nokia will not trade in the single-digit price point for much longer. It will take a few analyst upgrades to give the stock a lift.

The discipline to avoid low margin deals will lift profit margins, as Nokia expects to end 2020 with a ~27% market share of the 4G+5G mobile radio market.

CEO Rajeev Suri said, "we ended the quarter with more than 220 customer projects underway using our new FP4 chipset and around two-thirds of those projects involve either new footprint for Nokia or Nokia displacing a competitor." At this pace of market share growth, Nokia is trading at too much of a discount.

Nokia posted softer Q2 sales, though orders improved for the first half of 2020. The disruption of COVID-19 on vendors is moderating in Q3 and coming to an end beyond that. Even if the world experiences a "second wave" or a worsening continuation of the first wave, demand for faster networks is only growing.

Sales in China declined significantly in Q2 and fell by 2% in Europe. Still, the pandemic is pressuring the 5G transition, which benefits Nokia and other suppliers like Ericsson.

When analyst Simon Leopold at Raymond James asked Nokia about the Verizon (NYSE:VZ) rumor, the company indirectly refuted it. CEO Suri said "we are committed to continuing to help them build the best reliable and highest performing network. We work with them across multiple technologies so far end to end portfolio, if not all."

Suri asserted that "we have a longstanding strategic partnership in key technologies, and we play a critical role in Verizon's 4G networks and continue to work with them to accelerate innovation around 5G technology."

The company already responded to the rumor last month but the stock failed to recapture the drop. The combination of a strong quarter and a higher outlook will undo the discount.

Price Target and Your Takeaway

Barely half the analysts rate Nokia stock a buy, with a $5.38 price target. The latest price targets are:

Respectfully, the modest price targets come from analysts ranked 4 stars or more. I believe my ranking will increase from another "buy" ranking on Nokia.

Nokia scores are virtually identical to that of ERIC stock. It lags only on momentum, which would change if shares continue past $6.00.

Savvy DIY investors may apply a 5-year discounted cash flow model here. In this scenario, the stock is worth at least $8.00.

Value investors looking for the next wave of growth should look at 5G and buy Nokia.