Predicting future sales for a given drug is always challenging, let alone in a case like Incyte’s (INCY) Jakafi (Marketed in Europe under the name Jakavi by Novartis), which is the first drug in history to receive approval for myelofibrosis (MF). With no precedents to serve as a benchmark, it is still unclear how big Jakafi can be. However, based on Incyte’s recent 2013 guidance and remarks from the head of Novartis’ (NVS) oncology business unit, it has a high likelihood to reach $1B already in 2016.

Incyte’s better than expected Q4 sales and 2013 guidance ($210M-$225M US sales) for Jakafi imply the drug is still far from reaching saturation in the MF market. In particular, the upbeat guidance implies Incyte is confident in its ability to expand Jakafi use in earlier stages of MF and increase treatment duration by preventing side effects. Given management’s conservatism and the fact the drug is on the market for only 1 year, this guidance looks beatable assuming initial trends in the clinic stay intact.

There are 2 driving forces behind Jakafi’s renewed momentum. The more important one is repositioning Jakafi as a “life extending” as opposed to “symptomatic” drug. This is based on the survival updates from 2 phase III trials (COMFORT 1 & 2) which showed a clear trend of improved survival in patients who received Jakafi. Impressively, the trend was achieved with limited follow up and despite extensive crossover from the control arms to the treatment arms.

This finding is part of a retrospective analysis that needs to be further validated, and a survival advantage is unlikely to appear on the drug’s label. Still, if physicians become convinced that Jakafi prolongs survival they will be more inclined to offer the drug not only to advanced stage patients but also to less symptomatic patients. The survival update was presented only in December 2012, so its impact is only starting to take effect. As the data matures (assuming the positive trend persists), the survival benefit is a critical component in Jakafi’s growth trajectory.

The second driving force is a dose titration treatment scheme Incyte is promoting in order to avoid treatment discontinuations. This market education effort should increase average duration of treatment by preventing side effects, primarily low platelet counts. In contrast to the survival trend, the dose titration scheme will be added to Jakafi’s label and is expected to have an immediate effect (which can be observed in 2013 guidance).

A lot of credit should go to Incyte’s new Chief Commercial Officer, Jim Daly (ex Amgen). On top of successfully handling Jakafi’s launch, he is doing a superb job conveying the Jakafi story to Wall Street. Daly’s expertise and experience were very visible on Incyte’s last quarterly conference call, where he provided a lot of information (both quantitative and qualitative) on Jakafi’s commercialization.

Another source of excitement is coming from Novartis, which has marketing rights for Jakafi (brand name Jakavi) outside of the US. At the recent Leerink conference, Herve Hoppenot, head of Novartis’ oncology business unit, gave an upbeat picture on the drug’s launch in Europe. He stated there is healthy demand and physician excitement around Jakavi, demonstrtaed by almost 3000 patients who are on an early access program.

Novartis is already implementing the dose titration scheme and so far it is not seeing the safety issues Incyte experienced in the US. Hoppenot predicted Novartis will generate $1B in Jakavi sales, half of which expected to come from MF and the rest from another blood disorder (PV, Polycythemia vera). Incyte is eligible for a double digit royalty rate on ex-US sales, which translates to a substantial potential annual payment.

There are several programs in clinical development for MF with a similar mechanism of action to that of Jakafi (JAK1/2 inhibition). The 2 most advanced programs are Sanofi’s (SNY) SAR302503 and Gilead’s (GILD) CYT387 (via the acquisition of YM Biosciences). Both drugs appear active in dealing with MF symptoms such as enlarged spleen and constitutional symptoms.

SAR302503, which is more Jak2 selective, is in phase III with results expected in the coming months. The trial is expected to meet its primary endpoint but based on phase II data Jakafi appears to be better tolerated. CYT387 is considered a more serious threat due to a controversial, unexplainable effect on anemia, which is the third hallmark of MF (after enlarged spleen and constitutional symptoms). According to a recent note from Goldman Sachs, Gilead plans to conduct a head to head phase III vs. Jakafi. If CYT387 proves as effective as Jakafi in terms of spleen response but superior in terms of anemia resolution, it could become a strong competitor. Gilead expects to start phase III later this year, so Jakafi is safe at least for the next 2-3 years.

The estimated US prevalence of MF in the US is ~18,000, most of whom are symptomatic to some extent. Annual cost of Jakafi is ~$92k. Assuming 9,000 receive treatment with a JAK inhibitor at an annual cost of $70k (patients may have treatment holidays), the addressable market is $630M. PV is much more prevalent (90,000 patients in the US) but it is typically milder and the unmet need is lower. There is still a subset of patients who do not respond or are intolerant to standard therapy (hydroxyurea), but the size of this population is debatable. Assuming a 7 % penetration rate (6,300 patients), results in an additional market opportunity of $440M. Therefore, the US market opportunity for Jak inhibitors can be conservatively estimated at $1.1B, excluding additional indications.

Jakafi’s current run rate (~$180M) was achieved with only 1 year of sales, approval only in MF and it hardly reflects the impact of the new dosing scheme and the survival benefit. If Jakafi receives approval in PV (2014) and the survival trends from COMFORT1/2 are maintained, Jakafi could generate sales $600M in 2016, assuming it takes 55% of the “Jak market”.

Applying a 20 P/E multiple discounted by 15% yields a valuation of $4B. Importantly, this figure excludes other assets in Incyte’s pipeline such as baricitinib, partnered with Lilly (LLY), which is in phase III trial for rheumatoid arthritis (RA). Another intriguing phase II program that does not appear in Incyte’s pipeline is INCB039110, a selective Jak1 inhibitor. The drug is in phase II in RA, psoriasis and MF. There is a lot of excitement around selective Jak1 inhibitors following the huge deal between Abbott and Galapagos ($150M upfront payment after a small phase IIa). 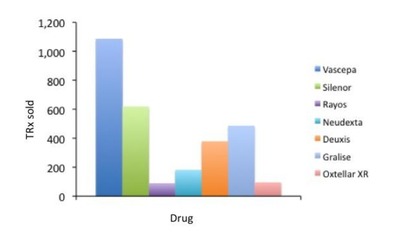 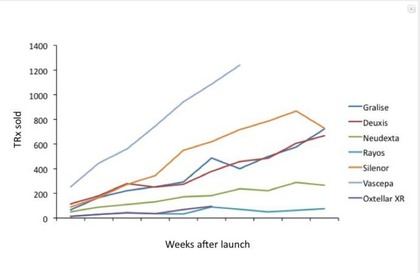 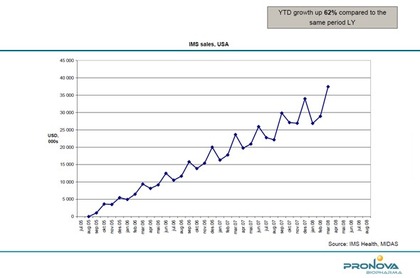