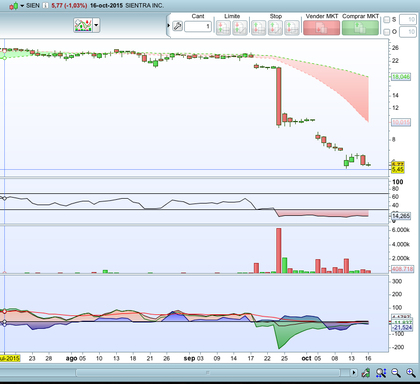 yo he entrado por un motivo

Bueno, pues estos babosos no me responden al e-mail, ahora me he cabreado...

Sientra Inc. aimed to take on the kings of the breast-implant industry when it entered the U.S. market in 2012, offering women what it said was a new set of shapes and textures to choose from -- round or shaped, smooth or textured, oval or classic.

Known for their "gummy bear," shape-retaining texture, Sientra’s silicone-gel implants garnered a following of consumers and plastic surgeons for augmentation and reconstructive surgery. By this year, the company was supplying about 7 percent to 12 percent of implants in the U.S., where breast augmentation is a $300 million market, according to the American Society of Plastic Surgeons.

The shares soared after an initial public offering last October, rising 72 percent to a peak of $25.75 in June. But in the past month, Brazilian regulators have temporarily closed the factory of the company’s sole manufacturer for silicone implants, sending the stock tumbling, and analysts have discontinued coverage.

Products already made by the factory owner, Silimed Industria de Implantes Ltda., can’t be distributed in Europe because the company has had its marketing certificate suspended after an inspector said it found particles on the surface of its implants. Sientra has voluntarily put sales of the product on hold in the U.S.

Sientra said in a Sept. 24 filing that it’s been assured that Silimed is working with European regulators to resolve the issue, and said in an Oct. 9 statement that the pause in U.S. sales is temporary while it’s in discussions with regulators. In a statement to Bloomberg News, the company said it’s working closely with the FDA and conducting its own review to resolve the matter as soon as it can.

The FDA hasn’t released any warning notice for Sientra and agrees with the company’s cautionary recommendations, the agency said in an e-mail.

In a statement to Bloomberg News, Silimed said that Brazilian and international specialists are performing technical studies to verify the safety of its products after concerns were raised by a European inspector that led to the suspension of the marketing certificate.
There are no international standards on the quality or quantity of particles on implants, and Silimed’s tests over its 37 years of manufacturing have shown that sterile particles don’t represent any health risks, Silimed said.

Silimed and the Brazilian regulatory agency, Anvisa, both said the factory was shut down for precautionary reasons while the facility was under review and that Anvisa has made no determination that the factory was contaminated. The pause in operations of Silimed will last until the company corrects some processes Anvisa identified as not conforming to best practices, Anvisa said.

"This is not a real issue of patient safety but more an issue of manufacturing, and it looks like it should be correctable easily," said Scot Glasberg, president of the American Society of Plastic Surgeons, in an interview. Glasberg doesn’t personally implant Sientra in his patients. Sientra and its larger competitors, Allergan Plc and Mentor Worldwide, are backers of the American Society of Plastic Surgeons and are members of its corporate leadership council. Allergan and Mentor, a unit of Johnson & Johnson, dominate the market for implants for breast augmentation.

Sientra went public in October 2014, two years after it got FDA approval for its implants and entered the U.S. market. It has beaten Wall Street’s average revenue estimates every full quarter since its initial public offering.

While some plastic surgeons consider Sientra’s products interchangeable with its competitors’, others are lamenting the latest developments as a setback for a market that was just beginning to offer more choices.

"Sientra is a great implant and they’re now being denied to Americans," said Grant Stevens, founder and medical director of Marina Plastic Surgery and clinical professor of plastic surgery at the University of Southern California.

Stevens, who said he has implanted the most Sientra products of any U.S. plastic surgeon, is considering stopping his implant surgeries until Sientra comes back on the U.S. market because he prefers the brand. While he has been a paid consultant for Allergan and a paid researcher for Mentor, he said he has never been paid by Sientra and doesn’t own Sientra stock. He has been a lead author on a number of studies of products made by Silimed.

Sientra’s troubles started with a review of Silimed’s Brazilian factory by TUEV SUED AG, a company empowered by German regulators to inspect the manufacturing of products destined for export to the continent. The inspection concluded that there were particles on implants in the factory. In a statement, TUEV SUED said Silimed wasn’t able to adequately explain the source of the impurities or to provide sufficient measures to remedy the situation.

A spokesman for TUEV SUED said the company suspended three quality-management certificates at the Silimed factory through Dec. 17. That led U.K and European Union health authorities tosuspend Silimed’s marketing certificate, according to a Sept. 23 statement, and other regulators took note. Australia’s Therapeutic Goods Administration issued a statement Sept. 25 identifying the particles as silica and cotton and saying that the distribution of Silimed products in Australia would remain on hold until an investigation is complete.

The decline "more than reflects the future regulatory risk," Stifel Nicolaus analyst Jonathan Block said in a note to clients, while Piper Jaffray & Co. analyst Thomas Gunderson said that he didn’t foresee any supply or safety issues for Sientra at the time. Block declined to comment because he has since suspended coverage. Gunderson has also suspended coverage and didn’t respond to a phone call or e-mail.

Then on Oct. 5, Sientra announced that the Brazilian regulatory agency Anvisa had halted all manufacturing at Silimed. Sientra shares sank 21 percent that day and fell for the next five trading days, reaching a low of $5.83 on Thursday.

While some patients prefer the Sientra brand, differences between its implants and those of Allergan or Mentor are subtle, so its absence won’t disrupt the market, said Glasberg of the American Society of Plastic Surgeons.

"There’s not going to be a need," he said. "The others are readily accessible."

We are aware of a fire in one of the two manufacturing buildings at Silimed, and are in contact with Silimed in order to assess the situation. Our thoughts are with the entire Silimed team. Our management team is working diligently to get answers and we will share additional information when it is available.