WHO IS NESTLÉ
Nestlé is the largest food company in the world. Its headquarters are in Vevey, Switzerland, and its products are sold in about 84 countries, with production centers all around the world. The firm markets all kind of food products, from bottled water, ice creams or baby food, to frozen food, coffee or even pet food. In 2008 it had a turnover of around 121.300 million dollars and more than 280.000 workers. 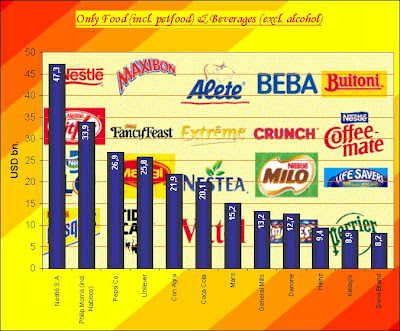 In Spain Nestlé has a turnover of 2.053 million euros, 14 production centers, and its headquarters are in Esplugues de Llobregat (Barcelona). Nestlé markets here famous brands as Nesquik, Nescafé, La Lechera, La Cocinera or Maggi among other, and it is present in all distribution channels: retail and wholesale, hotels and restaurants, impulse and FMCG (Fast Moving Consumer Goods).

ITS HISTORY
The company was started in 1886 by Henri Nestlé, a German pharmaceutical who lived in Switzerland. He was very interested in infant feeding, and he had developed an infant food to babies that couldn´t tolerate breast milk: the “lactated flour”. At that time it was a very important discovery, and Nestlé soon became very popular. His product began to be selling out off Switzerland quickly, first by Europe, and after by America too.

In 1905 the company grew largely because of the fusion with the Anglo-Swiss Condensed Milk Company. Despite being the smaller partner, the new company took the name of Nestlé because he was very popular. So it also started to market condensed milk too.

The company was progressively incorporating to its portfolio new product families as coffee, chocolate, frozen food, biscuits and many other products. Thus in 1929 the company had developed the milk chocolate, and it introduced in the market new products as Nesquik cocoa powder or Crunch chocolate bars. In 1938 it had invented the soluble coffee Nescafé. The Second World War interrupted part of its operations, but in compensation the company sold large amounts of coffee, chocolates and powder milk to the American Armed Forces, overall Nescafé, that became the favorite brand of the American soldiers.
The company continued its expansion with the installation of new plants abroad: Argentina, Chile, Cuba, Mexico, Denmark and the Czechoslovakia. Nestlé sometimes developed the new products himself, and many times it purchased other companies to market its products. So in 1947 it had purchased Alimentana, the Swiss company that had invented dehydrated soups under its known brand Maggi. In 1962 it had also purchased Findus, a Scandinavian frozen food company. And in 1969 it had gotten 30% of Vittel, a French bottled water company, also getting into the beverages market in this way.
In the late 60´s the Swiss giant was already present in areas such as prepared meals, ice creams, frozen food, chocolate and candies, condensed milk, coffee, infant food and bottled water.
During the 70´s Nestlé made a growing and expansion plan around the world, purchasing other companies as Ursina-Franck, a powdered milk factory, or Libby, an England juices producer.
In the 80´s with the improving of its financial situation, Nestlé continue his expansionist and diversify strategy. So it made a new round of acquisitions in new sectors: the American evaporated milk industry Carnation Co. in 1985, the pet food brand Friskies also in 1985, Vittel was purchased 100% in 1987, Buitoni-Perugina -that was the third food Italian company- in 1988,  etc. The company also developed new product range, as the skimmed products Sveltesse (1981) or Nestlé Breakfast Cereals (1984).
In 1988 Nestlé acquires the British chocolate and candy manufacturer Rowntree (with brands as Kik-Kat, After Eight, Smarties and Polo among other). With this operation, the Swiss company became the wold´s leading manufacter of chocolates.
Throughout its history, Nestlé has overall grown by buying regional food companies wich are restructured in national or international brands. During 90´s Nestlé continued its growning strategy, and in 1992 acquires the water bottled Perrier. In 1995 buy another water brand, San Pellegrino, and at the end of 90´s acquires Spellers Petfoods and Purina.

ITS GLOBAL AND REGIONAL STRATEGY

Nestlé´s products are present all over the world, but in each country the offer is adapted to the local or domestic demand. In this way we can find taste, format or design differences for the same product by the country in wich it is market. For example, in France Nestlé markets the refrigerated desserts brand "La Leitére" that in Spain is called "La Lechera". In each country there are many differences in the product catalog, its design, its format, its recipe, etc. Although most of the Nestlé´s desserts are produced in France, it are elaborated and manufactured thinking in their target markets.

At the same time that Nestlé markets global brands as Nescafé, Maggi, Nesquik or Cheerios, the firm has also regional or local brands that only are sold in their respective countries. For example, in Spain it is sold domestic brands as the tomato sauce Solís or the fabada cans Litoral, in England Nestlé markets brands as Libby´s or Herta, in Italy it has brands as Bacci or Alemagna... and the same situation is repeated in all the countries.

In Spain, the Swiss holding has acquired several companies as the ice cream factories Conelsa (with its popular brand Miko) and Avidesa (1995) , the frozen food company La Cocinera (1999), and it has Spanish brands as Solís, Litoral, Flor de Esgueva, MG Quesos, Cafés La Estrella, Brasilia, Santa Cristina and Cafés 154 among others.

The first production center that Nestlé opened in Spain was the lactated flour factory in La Penilla (Cantabria) in 1905. Nestlé started being known in Spain as a baby food brand. In fact, the factory of La Penilla also began to produce another kind of baby food.

At the present the Swiss company has 13 production centers in Spain distributed though 7 autonomous communities. 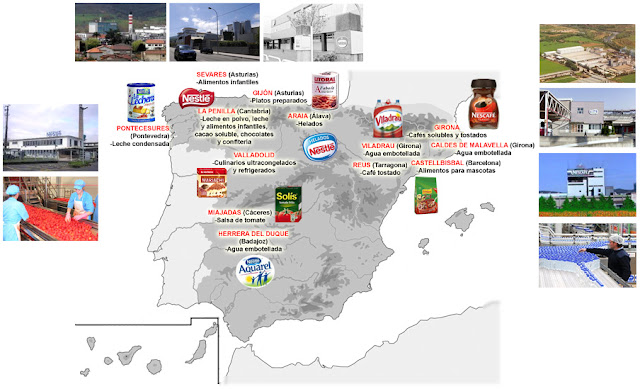 Below there are some brands of Nestlé: 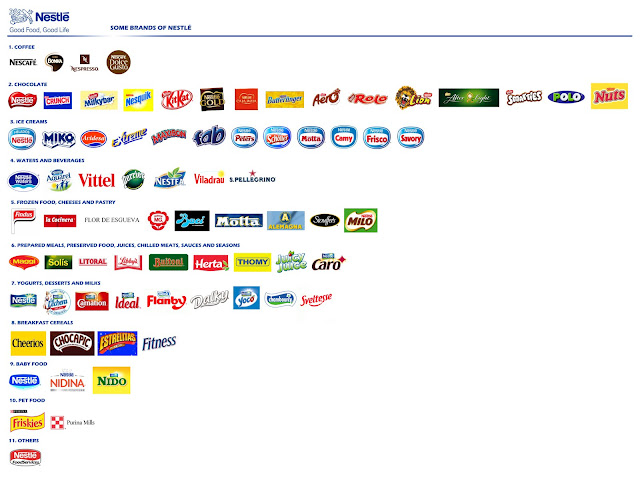 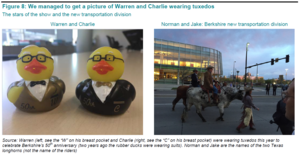